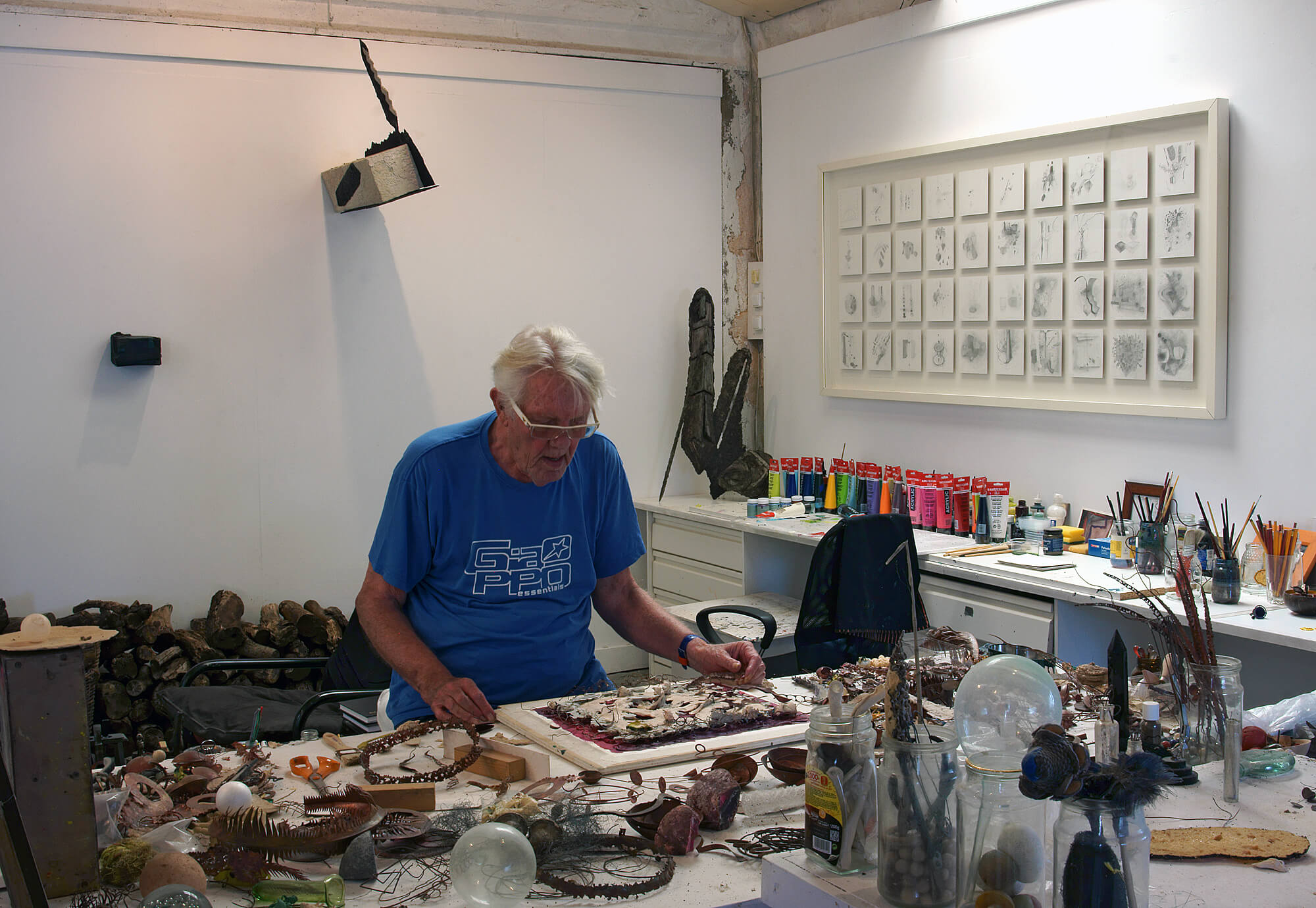 The Mediterranean island of Menorca where I have lived and worked for the last eighteen years, embodies the extreme universal energy of landscape which most acutely fires my imagination. Its sense of transience is paramount to my response to the physicality of the landscape and the very earth, wind, fire and water from which it is made. The prevailing north wind (Tramuntana) which is so ferocious in winter that it shapes the flow of the land from north to south giving the entire landscape the feeling of rhythmic sea. The sheer brilliance of the suns light at noon which dematerialises objects which are instantly recaptured in the darkest of shadows. Then there is the glowing, clear light of night, the moons translucent beauty which belies its gravitational power to move oceans.

Apart from the conflicting forces found in nature, I am deeply moved by the penetrating scars of mines, quarries and excavations and the often tragic yet disturbingly beautiful aftermath of places which have been transformed by the industrial workings of man. The quarries in Menorca are deep limestone “cubes” hand cut and hundreds of feet deep from which entire towns have been built. Now they are abandoned chambers full of reflected light which have the scale of Cathedrals containing the most mystical of energies.

With an almost reticent shyness there also exists a myriad microscopic environment of detail where plants and flowers defy the extreme elements in a struggle to survive, creating an inner world of intimacy to which I am increasingly drawn. The way a small cavity in a stone gives shelter to an embryonic growth within the rock which protects it.

For the last four decades my work has gravitated between sculpture and painting often spending long periods of time concentrating on one or the other. The constant has been an obsession with landscape, an intrigue with ambiguity and paradox and the over riding energy of colour. The focus of the more recent work is to combine even closer the physicality of sculpture with the illusions more generally associated with painting. The works are made in steel, copper, wood and resins and the occasional “found object”, all of which are coloured with layers of paint and pure pigment. Although the works have the fluidity of painting it is the sculptural forms which slowly gain prominence floating from the surface, increasing the sense of scale and inviting the eye to explore another secret place.

My overall desire is to make self contained worlds which simultaneously pay homage to, and express the power of nature in all its transient yet piercing beauty.

Whether he is working as a painter or sculptor, this artist celebrates the natural world, and especially those parts of it on which man has left memorable marks. Although aware of the prevailing concepts and fashions within the international world of art, Draper has serenely trod his own path, well clear of an art world “in whose overlit shallows thin voices are heard proclaiming their own emptiness to be a “new development”, as the Australian – born writer Robert Hughes has put it”. Indeed, the British art historian Francis Spalding believes that Drapers very lack of associations has helped him to earn “a fixed and lasting place in British art”

His generosity of spirit, his energy and his love of life are reflected in his work. Amid so much art that is glib, meretricious and spiritually empty, Draper is producing work that ravishes the eye and nourishes the soul.

As viewers we can hardly follow the line of Draper’s thoughts along all the channels of his imagination, but we can wonder at the results, at the daring attempt to solidify wind, the colour of throbbing heat, the ambiguity of half light, the sensation of a wisp of air or the experience of being under water. His feelings are induced by his involvement with his work, and by his passionate response to the island. The reality of the landscape remains an important source of inspiration but his constantly stated intention is to transcend it.